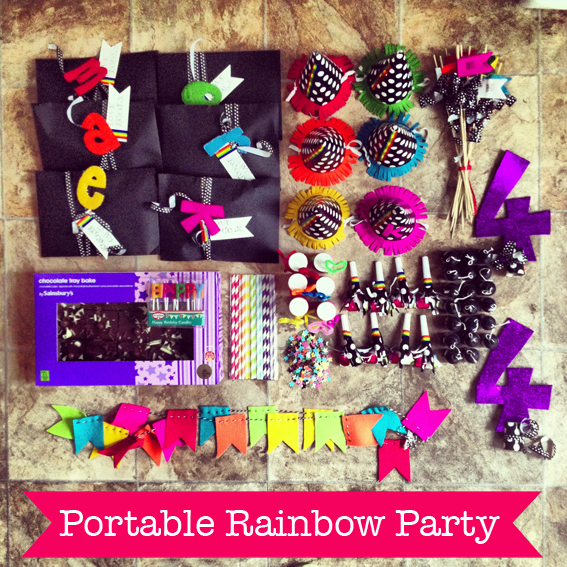 For the little ladies last birthday, we threw her a little rainbow party. We held it down in Devon and not one to make life easy, there was no time to put the party together down there, so it had to be made in London and transported to Devon. Not. A. Problem. She requested the rainbow theme, I have no memory why but her wish was my command as they say and I set about putting together a portable rainbow party. Now fortunately this was a mini little party, for just 6 children in total, to be held in a country pub with a soft play barn, in the middle of absolute no where. As there was six children I chose to go with six colours of the rainbow, giving each child an allotted colour and threw in a bit of black and white for good measure. I purchased a roll of b&w wrapping paper, and as always the rest of it I made from bits and bobs I already had. The most used items consisting of: felt squares in each of the 6 colours, coloured craft paper, rainbow washi tape and a roll of b&w gift ribbon. 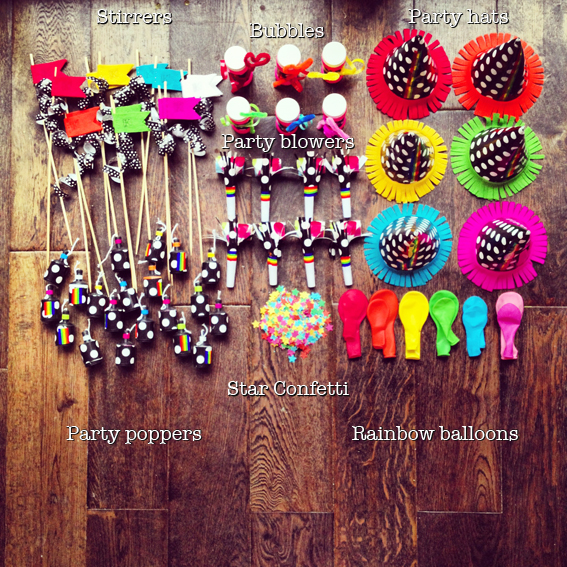 This photo shows the components I made, pre-purchasing the bought goods. The hats I made from card wrapped in the wrapping paper, a piece of rainbow washi tape placed on the side, a fringed felt trim glued to the base and a piece of elastic tied to hold them on. The little lady had the pink to save arguments, she is pink and only pink so I put a little pink K on her hat, to show she was the party girl. The bubbles I had in the cupboard for years, they came from Poundland in a pack of 9. The blowers had been lost so I made these rainbow heart pipe-cleaner blowers instead, wrapped the wrapping paper around the bubbles and tied on the blower with co ordinating gift ribbon. The party poppers, were wrapped with the wrapping paper and stuck with the rainbow washi tape. The party blowers were the best from a bad selection at Sainsbury's. I washi taped on a piece of fringed wrapping paper. The drinks stirrers are skewers with little felt flags glued on, I stamped a letter K onto each one and tied a long piece of the gift ribbon. And lastly the confetti stars, I made these by hand with craft paper and a star punch. They don't look like much I agree but they took blinking ages, and if I ever went to the gym and knew what it felt like to work out then I would say, making these felt just like that. I would like to say I had abs of steel after. I didn't, but I sure could feel it for days and days after. In the future I shall be buying confetti rather than making it. 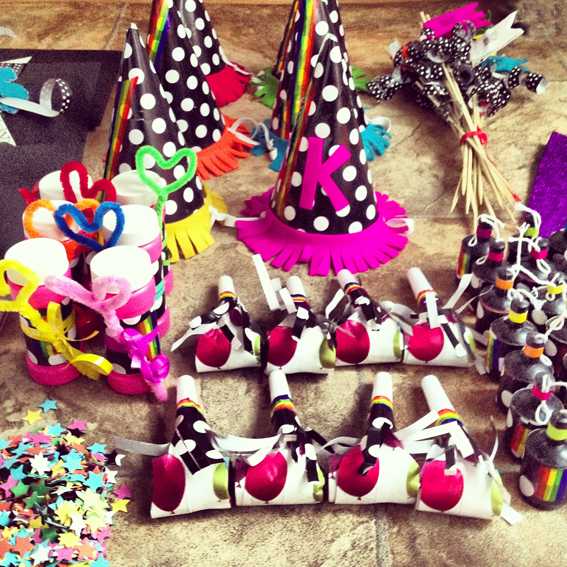 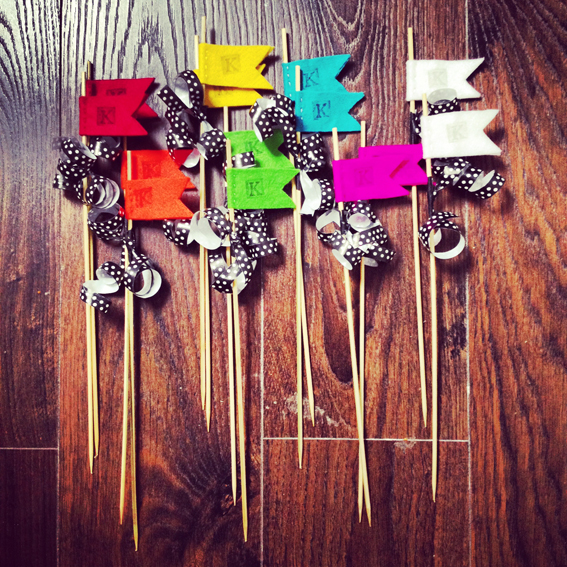 These were put into the drinks and used as decoration.

As we all know, a party is not a party without a goody bag, so I set about making simple favours for each of the children. I could not find any nice party bags locally so instead purchased a pack of 8 black C5 envelopes from Tiger for a pound. Then amassed a selection of b&w/ rainbow themed goodies to pop inside. The black and white lollies were also from Tiger, the sweets and balloons from the supermarket, and the stars which I made myself. I popped it all inside and sealed. I continued the each child having their own colour theme, and evidently colour coordination overruled healthiness on this occasion, quite rightly too. 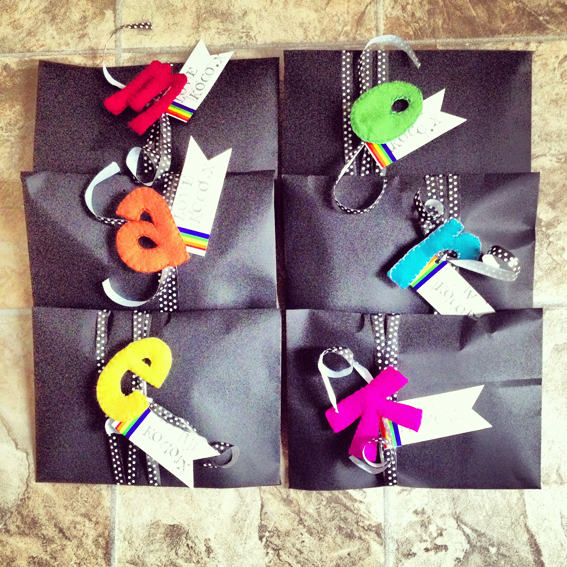 Once put together they looked a little something like this, quite nice for how little they cost. I tied the gift ribbon around three times and knotted. I made little flag labels from white card, stuck on a piece of rainbow washi tape and stamped: love Koco.x upon each one, and then attached to the ribbon. They were finished off by pinning on a personalised felt initial broach, which I hand sewed them all in their corresponding colours. 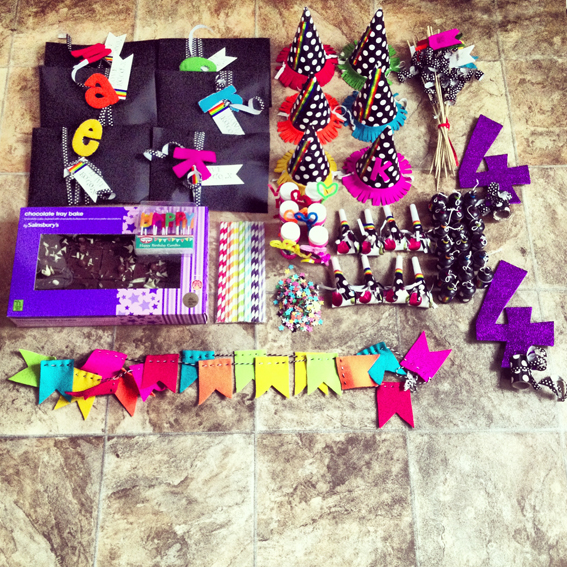 And this is it all together. The bunting stolen from little chaps nursery, seen here, the cake and candles from the supermarket, I had planned to make a cake, I am rather fond of baking cakes but again time ran out. The paper rainbow straws I purchased on eBay like here and the decorative 4's, I whipped up using glitter foam sheet, slotted onto a wrapping paper wrapped toilet roll (so glam) with the gift ribbon tied around and that is everything. 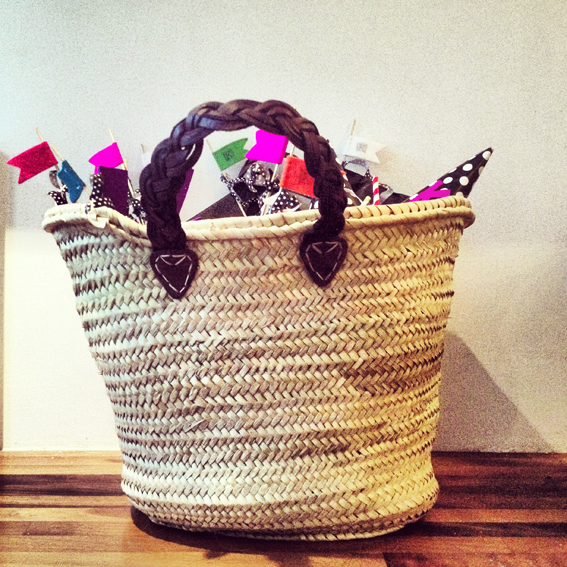 The plan had been to whip up a nice decorated box for it all, but time ran out and instead it was popped into this basket, which King Kwak bought me for Christmas last year. No decorated box, but once put into the car it did the job well and everything made it to sunny Devon in one piece, hoorah.

The venue does not look amazingly glam, but there was more to this room than it looks, it had its very own disco, disco lights,disco ball and toy cupboard, all turned on after the photos, and for any child this is the stuff of dreams. Rainbow decorated party dreams. 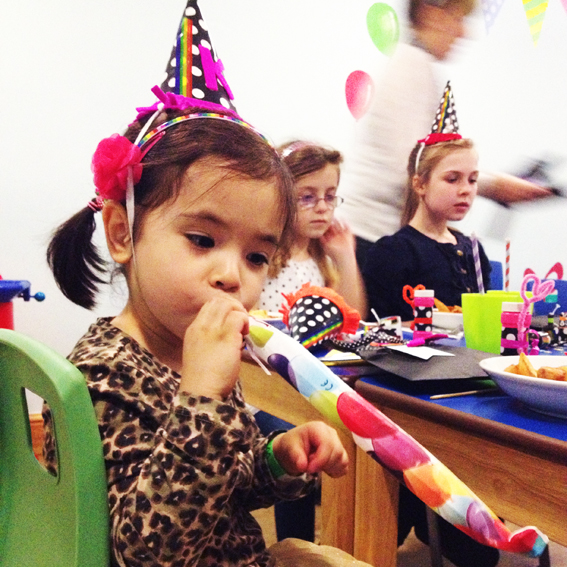 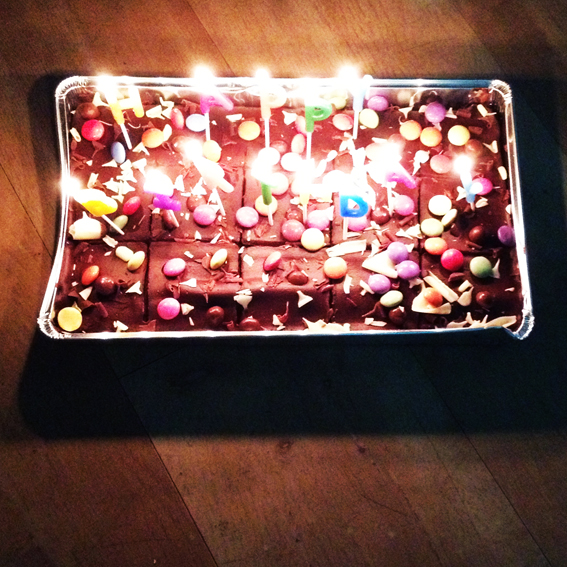 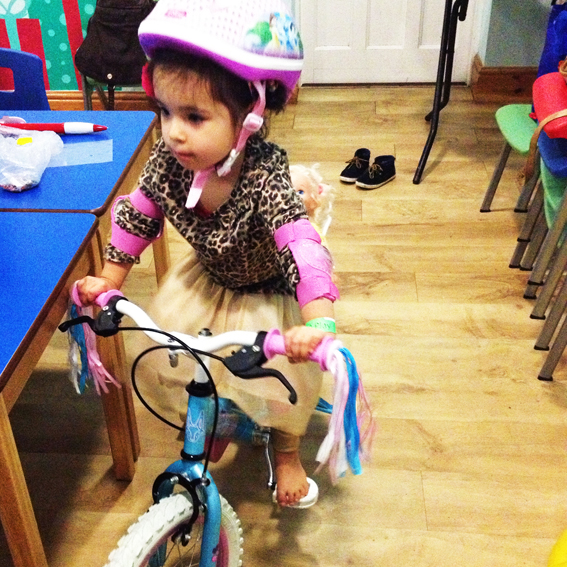 And the finale was the when the birthday fairy (King Kwak to you and me) dropped off her much wanted new bike outside the party doors. Lucky lady, she did circuits round and round that little room. Note: The bike did not fit in the basket.

Now I have to be honest, this little rainbow party did take a LOT more time than I expected, to put together. I carried a bag with all the materials around for ages doing bits when I could, so I will not be able to give you an honest time span, but lets just say it took ages and lots and lots of snippets of time here and there, but as the little lady had a fantastic time, it was worth every one of those snippets.

So I hope you like it, if you would like details of any items I would be happy to share. Have you made any solutions for portable parties? Its a long time to go but I had best get cracking on her next birthday plan, that one will most likely be London and Devon based, any ideas? 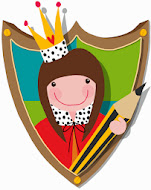